Sesamol (533-31-3), which is also referred to by industrial users as Sesamol or 3,4-(Methylenedioxy)phenol, is one of the lignan compounds which are extracted from roasted sesame oil. Besides the sesame phenol, other lignan compound extracts of the oil are sesamin and sesamolin.

Sesamol is a natural organic compound that is a component of sesame seeds and sesame oil. It is a white crystalline solid that is a derivative of phenol. It is sparingly soluble in water but miscible with most oils. It can be produced by organic synthesis from heliotropin. Sesamol has been found to be an antioxidant that may prevent the spoilage of oils.It also may prevent the spoilage of oils by acting as an antifungal and can be used in the synthesis of paroxetine.

Sesamol, together with its conjugated metabolites, is distributed in body tissues like liver, brain, lungs as well as the kidneys.When Sesamol is absorbed in the body, it protects DNA from damages and enhances DNA repair to rectify afterγ-radiation damage.

Because of its varied vivo bioactivities, sesamol plays an important role in the treatment of various diseases. One study established that sesamol inhibits the HepG2 cell colony formation. This supports other studies that suggest that Sesamol ruins the viability of the cancer cells.Normally, the majority of cancer cells need more oxidative stress as compared to the healthy cells in order to maintain the proliferation-apoptosis balance.

Some H2O2 level is required in the process to act as signaling molecules within the Ras-Raf-MEK-ERK pathway, thus the ability to stimulate redox-sensitive transcription factors like NFκB ( a protein complex that regulates DNA transcription, the survival of cells as well as the production of cytokine) and responsive genes that support the survival of cancer cells.

In addition to making your body more sensitive to insulin fluctuations, sesamol promotes the metabolism of brain energy as well as the brain cells. It minimizes the levels of blood glucose levels and boosts  Streptozotocin (STZ), which are primarily meant to deter the functionality of the beta cells that are responsible for the production of insulin in the pancreas.Nevertheless, too much H2O2 triggers cell cycle arrest/aspoptosis. Sesamol causes mitochondrial dysfunction and increases the production of H2O2, consequently increasing HepG2 cell oxidative stress. The increased stress level causes a reduction in the production and release of the substances that may lead to the production of inflammations that could lead to cancer.

Some studies indicate that the interaction of sesamol and DNA is likely to take place at the latter’s groove. Still on that, another research study shows that the cell cycle that has been induced by sesamol arrest at S phase, and this happens in a concentration-dependent way. This is how sesamol causes DNA damage and obstructs the replication of DNA. 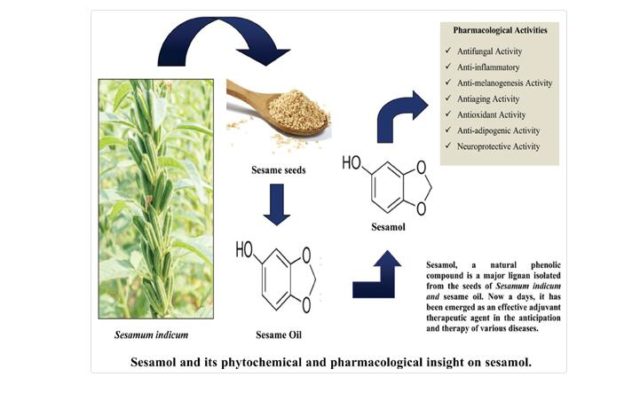 (1) Sesamol is rich in antioxidants that may significantly benefit your health.

(2) Animal and test-tube studies show that sesame powder may reduce inflammation. However, more studies in humans are needed.

(3) Sesamol is a healthy oil rich in monounsaturated fats, which may reduce heart disease risk factors.

(4) Consuming sesamol may help regulate blood sugar levels, especially for those with diabetes.

(5) Sesamol may improve symptoms of arthritis, but research is limited to animal studies at this time.

(6) Sesamol is a natural product that may help heal wounds and burns. However, research is limited to rodent studies, and more research in humans is needed.

(7) While sesamol may have some ability to repel UV rays, there is limited evidence to support its effectiveness. It’s still best to use sunscreen.

(9) Topical application may relieve pain. Some studies have shown that a massage with sesamol may help reduce arm and leg pain.

C57BL/6J mice were treated with 0.05% sesamol (w/v) in the drinking water for 7 weeks, and then the mice were treated by intraperitoneal injection of LPS (0.25 mg/kg) for 9 days. Sesamol supplementation significantly improved (by 36.9%) LPS-induced decreased spontaneous alteration in Y-maze test, as well as significantly restored LPS-elicited mice cognitive deficits through restoring performances such as escape distance in Morris water maze test. Moreover, sesamol prevented LPS-induced increases in Aβ1-42 formation, levels of amyloid precursor protein, and neuronal β-secretase 1 (BACE1) in the brain. Sesamol reduced LPS-induced glial over-activation by inhibiting MAPK and NFκB pathway as well as expressions of inflammatory mediators such as IL-1β and TNFα. Furthermore, LPS-induced transcriptional factor NFκB DNA binding activity was also inhibited by sesamol as examined by the electrophoretic mobility shift assay and molecular modeling.

These results indicated that sesamol mitigated LPS-induced amyloidogenesis and memory impairment via inhibiting NFκB signal pathway, suggesting that the compound might be plausible therapeutic intervention for neuroinflammation-related diseases such as AD.

previous
HGH: Is it a right choose?
next
Is D-Lysergic acid methyl ester a hallucinogen?